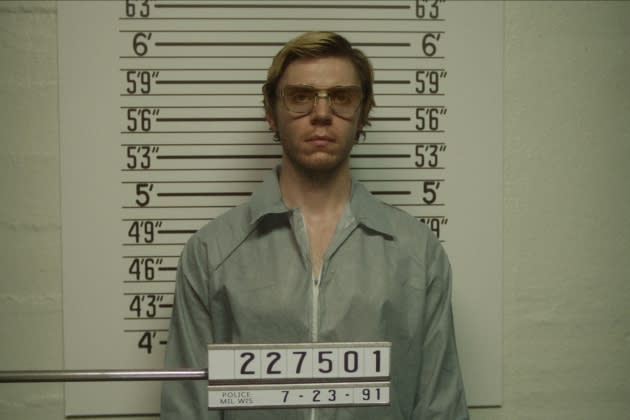 It takes six episodes for “Dahmer — Monster: The Jeffrey Dahmer Story” (yes, that is indeed the show’s full name) to meaningfully expand beyond the scope of either the serial killer or Evan Peters’depiction of him. In that episode, “Hushed,” coordinated by Paris Barclay and composed by Janet False and David McMillan, the story of Dahmer victim Tony Anthony Hughes comes to the forefront. Tony (played with warm charm by “Deaf U” alum Rodney Burford) was a gregarious aspiring model with a big heart. He was Deaf, Black, gay, a great dancer. His friends and mother (a moving Karen Malina White) loved him very much. With every moment Burford gets to give Tony new life, the inevitable end of “Silenced” becomes all the more harrowing, and the cops’ inaction to find the truth is all the more infuriating. But as the show’s nonsensical maze of a title suggests, this episode is an exception rather than the rule. Otherwise, Ryan Murphy and Ian Brennan’s new Netflix series is a grim, sepia-toned slog that rarely justifies its own existence.

On the surface of it, Murphy enlisting his go-to actor Peters to portray one of the most notorious serial killers isn’t at all a surprise. Alongside longtime collaborator Ian Brennan, “Monster” gives Murphy the opportunity to combine elements of “The Assassination of Gianni Versace: American Crime Story”(likewise about a gay hunter pursuing depression with brutality) and “Ratched” (the grim “One Flew Over the Cuckoo’s Home” prequel series that gave a history to a scandalous antagonist). Peters, influencing an unnervingly level Wisconsin complement, gets to give yet another perturbing performance. But two years after the project was first announced, the surprise-drop rollout of “Monster” is… muted, to say the least. No episodes were available to screen before the premiere; no stars were present to interview, from Peters to Niecy Nash to Molly Ringwald. There was no premiere, no party, no pomp nor any circumstance. Not even the accompanying “Jeffrey Dahmer Tapes” — the “Conversations With a Killer” the follow-up to Netflix’s previous Ted Bundy series — dropped alongside “Monster” as might have once been expected. As Murphy’s enormous Netflix deal looks set to fade into the ether, so, too, do his final projects for the streamer.

Then again: even given all the attention in the world, “Monster” wouldn’t have earned the hype. Like “Versace,” it begins towards the end of the story before rewinding to show how “Jeff” came to be, in scattershot flashbacks. Murphy and Brennan’s scripts hammer home the show’s most obvious themes with the such blunt force that it’s a wonder some scenes got past the first draft stage. Jeff’s parents (Richard Jenkins and Penelope Ann Miller, doing their best) fight in weeping clichés. Jeff wheedles his victims in every episode with constant pleas for them not to leave because he’s “tired of everyone leaving me.” (Abandonment issues, get it?) In fact, given the history of Murphy’s oeuvre, the most surprising element of “Monster” might be its relative restraint when it comes to gore. The details of Dahmer’s crimes are largely left up to the imagination, or else the creeping score doing all it can to build adequate suspense.

While knowing (or at least hoping) that Murphy and Brennan aren’t trying to engender sympathy for Dahmer, it’s egregious nonetheless that so much of this show is devoted to watching Peters’ Dahmer self-flagellate for being “weird” as if reenacting the serial killer version of Jughead’s now infamous “Riverdale” speech. (Dahmer: “I’m not a normal guy; I’m weird; I don’t fit in”; Jughead: “I’m weird; I’m a weirdo; I don’t fit in.”) Then, after spending six episodes (of 10) detailing Dahmer’s psychological profile and murders, the back half of the series turns to the aftermath of his arrest and the righteous fury the sheer horror of his transgressions inspired.

This includes many attempts at underlining exactly how Dahmer could get away with so many astonishing crimes while the marginalized communities he trafficked in — particularly queer, Black spaces — protested the obvious unease surrounding him. If there was a story worth telling here — and that’s a big if, given the onslaught of true crime overwhelming television these days — it was this. And yet, despite the detour of “Silenced,” these crucial moments are largely rendered in two-dimensional platitudes that rarely go as deep as the subject requires. Not even the formidable Nash, so good as Dahmer’s suspicious neighbor, can do much to change that. For as much as “Monster” makes moves to decenter him in its final episodes, it’s still “The Jeffrey Dahmer Story,” after all.

If you have any desire to see Peters battle incorporated homophobia by caressing a life-sized model, jerk off to recollections of destroyed creatures, or seriously cook a human kidney, I guess this show is here for you. Beyond that, though, it simply can’t rise to its own ambition of explaining both the man and the societal inequities his crimes exploited without becoming exploitative in and of itself. The story of Jeffrey Dahmer has been told over, and over, and over again. This version, despite its prestige trappings, has little else to add.