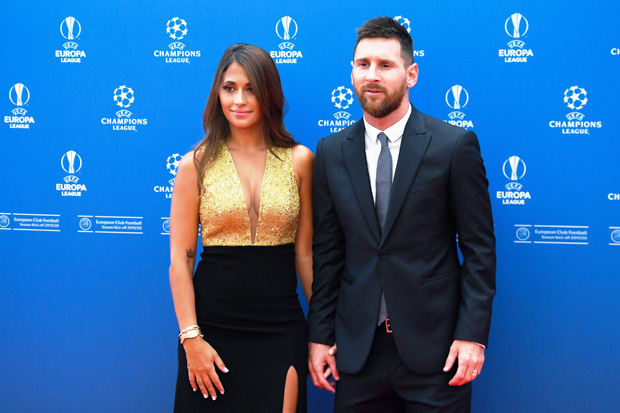 Lionel Messi’s Wife: Everything To Know About Antonela & Their 5-Year Marriage

Lionel Messi’s Wife: Everything To Know About Antonela & Their 5-Year Marriage Soccer superstars Lionel Messi and Antonela Roccuzzo have been married for five years. Find out everything about their relationship here.

There’s no doubt that legendary Argentine soccer player Lionel Messi and his gorgeous wife Antonela Roccuzzo have an adorably close relationship. But how exactly did they get together, and how are things going now? Find out more about the details of their marriage here.

When Did Lionel Messi Meet His Wife?

Lionel and Antonela both grew up in the same town together Rosaria, Argentina. Antonela is the cousin of Lucas Scaglia, another Argentine soccer player and a childhood friend of Lionel. According to The Sun, Lionel and Antonela met when they were only five years old. However, Lionel moved to Spain at the age of 13 to pursue his athletic career, keeping the two apart.

How Long Have Lionel Messi & His Wife Been Together?

Lionel and Antolea’s relationship began in 2007 when Antonela’s best friend tragically died in a car accident. As soon as he heard the news, Lionel flew all the way from Spain to Argentina to be there for Antonela, according to SportMob. Lionel then went public with the relationship in an interview in 2009.

In 2017, the two finally tied the knot after a decade of being together. They got married in their hometown when Lionel was 30 and Antonela was 29. The wedding had a whopping 260 guests, and pop star Shakira reportedly attended, per BBC. Antonella wore a gown by designer Rosa Clara, while Lionel sported a suit by Dolce and Gabbana. The ceremony was not only described by an Argentine newspaper as “the wedding of the year but” it was also referred to as “the wedding of the century.”

Antonela originally went to school for dentistry. However, in November of 2016, she announced that she signed a contract with Argentine modeling agency Ricky Sarkany. With over a whopping 19 million Instagram followers, it looks like her career has more than taken off.

According to her page, she is also an avid fan of staying in shape. One of her go-to activities is boxing, as she posted herself making and dodging a few impressive swings in January of 2021.

The couple’s eldest son Thiago was born in November of 2012. According to Si, Lionel got Thiago’s name and handprints tattooed on his leg following his birth. Their middle son Mateo was then born in 2015. “Mateo is very special. He’s always doing new things, things that grab your attention,” Lionel gushed to ESPN in 2019. Their youngest child, Ciro, was born in 2018. The happy mom and dad are avid about posting their family on social media, showing off their love to the world.

“You grow and you learn. You gather experience in all aspects of life, on and off the field. But, as a human being, having three children changed my perspective on life, and my way of thinking and it also helped me grow,” Lionel told FC Barcelona about how fatherhood has shaped him.